Our Patrons and Trustees

Meet our Patrons and Trustees who ensure we follow best practice and lead our development strategy and help us achieve our goals.

Angus Campbell was appointed Her Majesty’s Lord-Lieutenant of Dorset on 23 January 2014.

Raised in North Dorset, he emigrated to New Zealand in 1970 for two years to work for the Auckland Herd Improvement Association. He also gained his Private Pilots Licence.

On returning to England, Angus was Commissioned into the Army as an Army Air Corps Pilot and served in West Germany, United Nations Cyprus, Northern Ireland and Canada, and finally as Second in Command of 16 Flight Army Air Corps in Cyprus. He retired from the Army at the end of his Short Service Commission, but continued as a Territorial Army Pilot until 1982.

He returned to the family farm near Iwerne Minster, and later entered local politics, serving as Leader of North Dorset District Council and then Leader of Dorset County Council, before standing down in 2013.

Mr Campbell has been a Patron of the Foundation since 2014.

Bishop Karen holds a BA from the University of Bristol and trained for the ministry at Trinity College, Bristol. Prior to ordination she worked as an administrator with BTEC and the Royal Society of Arts and as a Pastoral Assistant in Essex and Hull.

She served her title at Northallerton with Kirby Sigston in the Diocese of York from 1995 to 1999. She was ordained priest in 1996 and in 1999 went on to become Priest-in-Charge of St Paul’s, Maidstone in the Diocese of Canterbury. During this time she was also Assistant Director of Ordinands and Area Dean of Maidstone. In 2006 she became an Honorary Canon of Canterbury Cathedral.

She was Archdeacon of Buckingham from 2007, a member of the Church of England General Synod for twelve years, and for the last two served as a member of the Panel of Chairs.

Bishop Karen became a Patron of the Foundation in March 2016.

Captain Michael Fulford-Dobson served in the Royal Navy for 36 years. He was High Sheriff of Dorset (1994-1995), appointed a Deputy Lieutenant in 1997 and became the Lord Lieutenant in 1999 and served until 2006. He is a Commander of the Royal Victorian Order (CVO, received in a private audience with Her Majesty in 1999), he is an Officer of the Order of the British Empire, (OBE, since 2008) and a Knight of the Order of St.John (KStJ, invested at St.James’s Palace in 2000). He was the first chairman of the Dorset County Hospital NHS Trust from 1991 to 1999 and first chairman of the Dorset Trust (1991-2000).

He became the Patron of the Foundation at its inception in 2000. He is a very strong supporter of the principals of the Foundations in its support for local communities and vulnerable people across Dorset.

Tom spent 26 years in the voluntary sector after a career in corporate sales and was chief executive of community volunteering charity Conservation Volunteers when he retired.

He moved to Dorset with his late partner Paul Cornes in 2012and set up the Paul Cornes Fund with Dorset Community Foundation after Paul died from prostate cancer in 2020.

“I wanted his memory to be kept alive and, because he adored Dorset, when I discovered the community foundation I thought it was an ideal partner to set up a fund with,” he says.

The fund has supported young people aged 16 to 25 in taking up vocational studies they could not otherwise afford.

Tom says: “Paul always told me to aim high and go for it. He’s the reason I’m involved and he’s the reason I will approach this with total passion and professionalism, because I couldn’t possibly let him down.”

While in Gloucestershire he became involved with the community foundation there, eventually being appointed vice-chair.

“We are that golden thread that links wealthy people in the county with those who are disadvantaged through a range of charities and individuals so I do see it as the number one place for supporting communities,” he says.

He combines his time with skippering the 72ft former BT Global Challenge yachts for The Tall Ships Youth Trust. The trust takes young people who may have been mentally and physically abused to sea to give them life skills.

Nick joined the Foundation as he has also worked with charities throughout his career and has significant expertise in advising and assisting not-for-profit organisations.

Following a brief army career, John moved to Dorset in1973. He trained and qualified as a Chartered Surveyor, working as an estate agent in Dorset and latterly all over England until he retired in 2013.

He has been a magistrate since 1987, a school governor for many years, and Dorset High Sheriff in 2017/18. His interests lie particularly in charities that alleviate social deprivation, assist victims of crime and help with the habitation of offenders. He much looks forward to working closely with all the many charities in Dorset on behalf of DCF.

Louise has a 25-year career in the financial services sector, 14 of which have been in compliance, including with the Financial Services Regulator.

She and her husband Rob moved from London to Dorset three years after buying a weekend home here and gradually falling in love with the county.

“I want to do something where I am giving something back where I can actually use the skills I have developed to really help people’s lives and help improve the community,” she said.

Louise, who has become a keen sea swimmer, has been impressed by the huge range of groups the community foundation supports. “It is great because of the variety of the projects that we are helping and being on the grants and impacts committee allows me to see the applications that are coming through,” she says.

Deb Appleby was formerly chief executive of Quartet, the community foundation for South Gloucestershire, Bristol and Bath and North Somerset.

She also has a background in local authorities after a spell at Dorset Council and was also involved at Surrey Community Foundation and a large national charity funder.

She became involved with Dorset Community Foundation after responding to a l plea for voluntary assessors for Dorset Coronavirus Community Fund grants.

She says: “I believe in community foundations because they have a unique ability to match funders who have a care for their local community with people who are rolling their sleeves up and doing something about it.”

Paul had a long career in public service. After 26 years working for the Foreign and Commonwealth Office, both overseas and in London, he was Director of Economic Development at the City of London Corporation until 2015, supporting London’s businesses and local communities, especially young people. He was appointed a Companion of the Order of St Michael and St George (CMG) in 2006.

He and his wife live in Christchurch and he is a keen supporter of the not for profit sector in Dorset.

Nick has almost 20 years experience in the nonprofit sector, having led andserved as a trustee / non-executive director of a number of organisations. Alongside this, he has worked in education and training, for example as Associate Lecturer at the Open University and Subject Expert at the Chartered Banker Institute. Across both careers, his overarching passion is financial inclusion, including welfare, addressing poverty, and debt.

William Ansell worked for 40 years in investment management in London but was brought up in the West Country where he went to school and university and always kept a house here. He is involved with a charity, Nehemiah, which runs residential courses for people recovering from addiction, often ex-prisoners. He has also been involved directly mentoring ex-prisoners to help stop re-offending. He is currently churchwarden of All Souls Piddletrenthide.

Sam is also a disability specialist and to support her consultancy work, she is the Chair of the South West Regional Stakeholder Network for the Disability Unit in Cabinet Office and studying towards a PhD with the Centre of Seldom Heard Voices, Faculty of Health and Social Sciences at Bournemouth University.

Both roles allow her to engage the voices of disabled people on a deep level which informs the development of best practice and co-created strategies to support the disabled community.

LEE was born and went to school in Dorset and has had a family home in the county all his life.

As a trustee he brings wide range of experience and a broad business perspective to Dorset Community Foundation gained from a long and operationally focused career in the Royal Navy.

His time in the Navy included frontline and staff appointments at sea, ashore and in Command.  Latterly he led an Overseas Territory on behalf of the UK Government, served as a marine and maritime adviser to the Foreign and Commonwealth Office and is now closely engaged in the Blue Economy, leading projects aimed at countering illegality at sea.

He is very support of the local community and holds a variety of board and voluntary roles.

He says he has a curiosity about most things but is especially drawn to military history, travel, safeguarding the marine and natural environment, cycling and the countryside.

He was appointed an Officer in the Military Division of the Most Excellent Order of the British Empire in 2016.

BEKKI has more than 20 years’ experience in the non-profit sector and has worked in community engagement, education and training, for example as Community Engagement Manager for Leonard Cheshire and Project Manager for London Borough of Camden.

Throughout her career she has combined innovation, simplicity, and a people-focused approach towards managing community projects and has a passion for inclusiveness and accessibility – giving a voice to the “quiet one in the room”.

Chair and trustee speak of their pride as they step down from their roles .

DORSET Community Foundation chair Jeremy Mills and trustee Jonathan Greenwood have spoken of their pride after stepping down from their roles after seven years’ service. 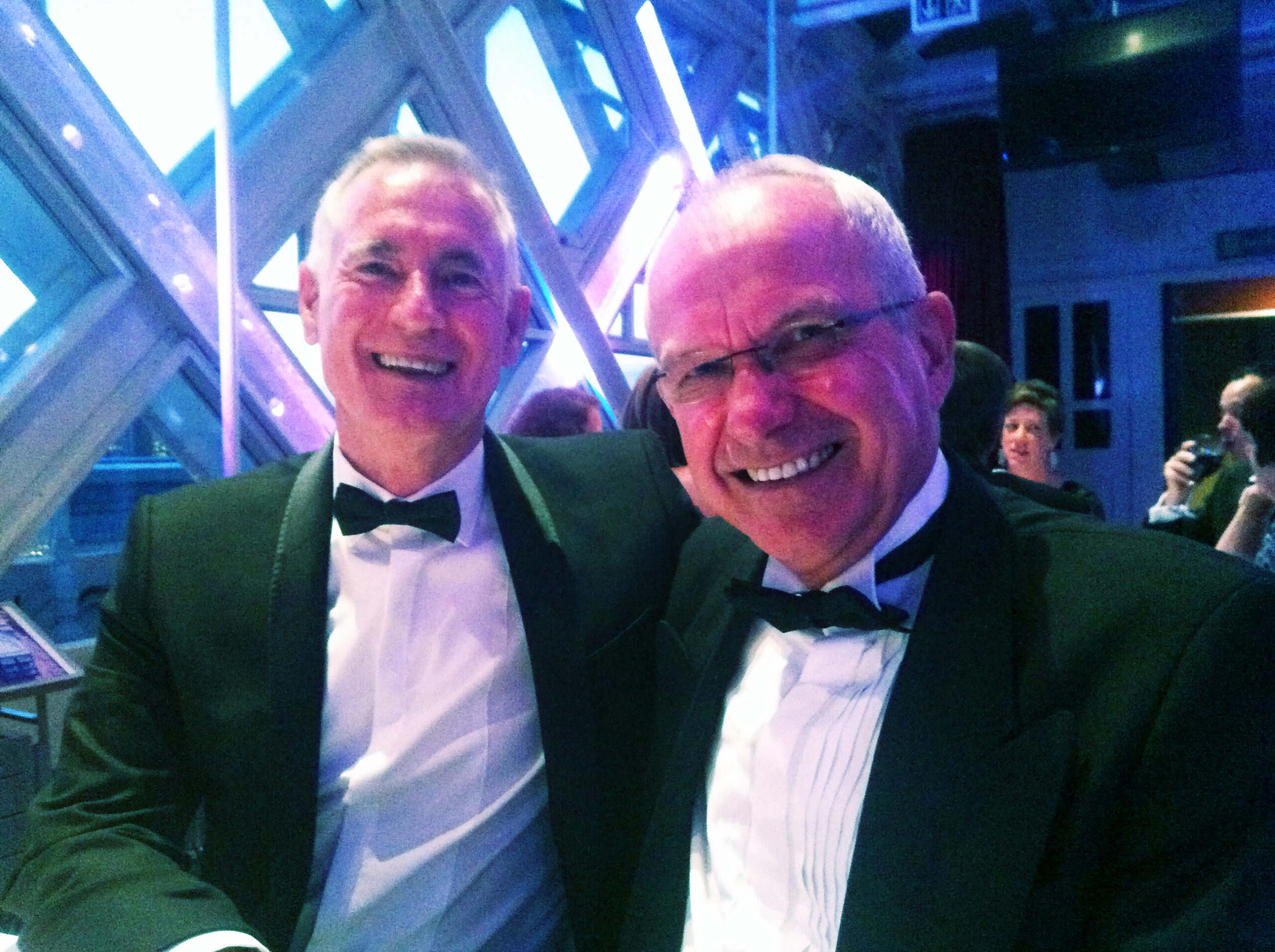 OUR chair Tom Flood CBE has spoken to a philanthropy website about why he set up a fund with Dorset Community Foundation in memory of his late partner Paul Cornes.