DORSET Community Foundation chair Jeremy Mills and trustee Jonathan Greenwood have spoken of their pride as they step down from their roles after seven years’ service.

Jeremy is succeeded by Tom Flood CBE as chair while Terry Standing takes on the role of vice-chair.

Solicitor and Notary Public Jeremy, who runs his own practice in Wimborne, took over as chair in 2020, having previously acted as acting co-chair for a number of years. He took over just as the community foundation began its response to the pandemic with its Dorset Coronavirus Community Fund, which eventually raised and distributed more than £1.5 million.

“It was an incredibly busy time but the whole of the board and the staff pulled together tremendously and I think our reputation and profile grew because of that,” he said.

Despite the distraction of Covid he was determined to bring new blood into the organisation and recruited four new trustees in the shape of Mr Flood and Mr Standing, as well as Louise Coulton and Deb Appleby. “We strengthened our team but although I was due to end my stint last year I stayed on a year to oversee a smooth integration,” he said.

“But for the last six months I’ve been able to step back. It’s almost been the perfect run-in, we’ve got an integrated team, there’s no sudden change, a good recruitment system and everyone knows what’s happening. It’s an organisation that is financially stronger, has a much higher profile and I feel really proud about being able to walk away from it when it is in such a good place.”

He said he has gained satisfaction from seeing the impact donors’ money made with the grass roots groups the community foundation funds. “I had great pleasure in seeing us give a small group £2,500 for a year because it kept them going for a year,” he said. “That’s 20 people in that little group and that’s really helped that community. I loved that.

“The last seven years has been challenging but ending up where we have has made it all worth it.”

Former Dorset County Council planner Jonathan said it was a desire to pay back the council’s faith in him when it supported him through his degree and gave him his first job that led him to volunteer with the community foundation.

After 12 years with the council and 20 years promoting culture and education through the British Council in South East Asia, China and Latin America, he retired to Dorset. “The council took a local lad under their wing and that gave me my first chance and that is what has motivated me in all of this, it’s trying to give something back,” he said.

He was introduced to the community foundation through a friend and became a trustee and has been a steadfast support to its grant-giving, working on grant panels and helping shape policy. He was the author of the Hidden Dorset report, a major piece of work into uncovering disadvantage in the county.

He said: “While at the council I worked on a strategic plan for south-east and rural Dorset and did a lot of socio-economic studies. What struck me all those years later was that some of those underlying development issues I found still existed.

“Some of it is quite shocking and shameful that we have not been able to sort out those issues and others are just typical of rural counties like rural isolation and pockets of deprivation.”

He is a passionate believer that statutory bodies need to work closely with the voluntary sector to tackle those issues and has been encouraged to see BCP Council and Dorset Council, as well as NHS Charities Together, working with the community foundation.

“It’s great to see they really recognise the value of the community foundation and the expertise that it has and it is in pretty good stead because people appreciate and understand the knowledge and the contacts it has got.”

During the pandemic Mr Greenwood threw himself into helping process Covid grant applications. “I, and fellow trustees Paul Sizeland and John Young were meeting to determine applications just about every day,” he said.

“I just thought that that was a kind of high point to go out on. To say that in my last year as a trustee the foundation gave out £1.5 million to help the disadvantaged of Dorset was really good.”

He said he has found satisfaction and enjoyment in his time at the community foundation from the new perspective it has given him. “It has been an honour and a privilege working with the team at DCF but also I’ve enjoyed getting to know my own county even better,” he said.

“I have been learning about places, people and issues while I’ve been getting out and about meeting the groups we fund, while finding out more about the great things going on in our county and that’s been very encouraging.”

Director Grant Robson said: “As an organisation we have been blessed by having Jeremy and Jonathan’s wise counsel and support, particularly during the most challenging period we’ve all ever worked through.

“We are incredibly thankful for their hard work, enthusiasm and encouragement and I’m very pleased that Jonathan has agreed to stay on in an advisory role. We all wish them both well in the future.” 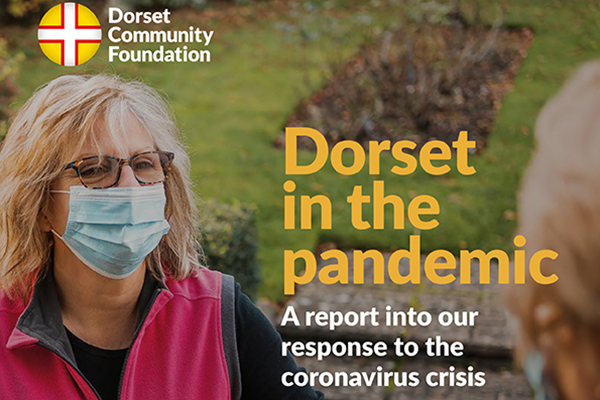 Report shows impact of £1.1 million distributed from our coronavirus fund .

Our new report into the response to the pandemic in Dorset has praised the work of thousands of volunteers and charity organisers for the work they did to keep the county safe.